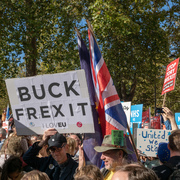 MEANING:
noun: The transposition of (usually) the initial sounds of words, typically producing a humorous result.

Examples:
“It is now kisstomary to cuss the bride.” (Spooner while officiating at a wedding)
“Is the bean dizzy?” (Spooner questioning the secretary of his dean)
ETYMOLOGY:
After William Archibald Spooner (1844-1930), clergyman and educator, who was prone to this. Earliest documented use: 1900.
USAGE:
“Charles enjoyed spoonerisms: He would often order ‘chish and fips’ in a restaurant to see if the waitress was listening, and when his oldest son, Ralph, had a daughter, Charles started referring to his other children (Mark and Jean) as Uncle Jark and Aunt Mean.”
Jean L. Manore; Husband. Father. Veteran. Hiker; The Globe and Mail (Toronto, Canada); Jan 15, 2019.

“As for her own red-faced moment on air, Hudson recalled how she coined a somewhat racy spoonerism in a reference to Killorglin’s Puck Fair.”
SecCaigh; AA Roadwatch Broadcasters Celebrate 21 Years; Irish Examiner (Cork, Ireland); Aug 31, 2010.

See more usage examples of spoonerism in Vocabulary.com’s dictionary.
A THOUGHT FOR TODAY:
"Yes," I answered you last night; / "No," this morning, Sir, I say. / Colours seen by candlelight, / Will not look the same by day. -Elizabeth Barrett Browning, poet (6 Mar 1806-1861)