Jan 17, 2017
This week’s theme
Words borrowed from other languages 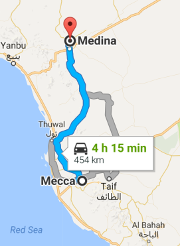 MEANING:
noun: A journey or migration, especially when taken to escape an undesirable situation.
ETYMOLOGY:
From the flight of Muhammad from Mecca to Medina in 622 CE to escape persecution. From Arabic hijra (departure), from hajara (to depart). Earliest documented use: 1590.
USAGE:
“He seamlessly presents historical information on such trail subjects as ... the Mormon hegira to Salt Lake that began in 1847.”
The Oregon Trail (review); Wild West (Tysons, Virginia); Dec 2015.

“In Blinded by the Right, his account of his ideological hegira from conservative button man to liberal media critic, David Brock describes a hilarious scene at an Arkansas bait shop.”
Charles P. Pierce; Politics: Sure, They Love Her Now...; Esquire (New York); Jun 2013.

See more usage examples of hegira in Vocabulary.com’s dictionary.
A THOUGHT FOR TODAY:
Justice will not be served until those who are unaffected are as outraged as those who are. -Benjamin Franklin, statesman, author, and inventor (17 Jan 1706-1790) [Editor's note: This quotation is misattributed to Franklin.]