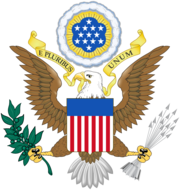 
ETYMOLOGY:
The eagle, in various positions, has been a popular bird in heraldry. A spread eagle is on the coats of arms of Germany, Poland, Romania, and the United States. Earliest documented use: 1550. Also see frogmarch.
USAGE:
“‘Residents were regularly harassed, stopped, searched; put up against a wall, the police car, the buildings, and spread-eagled,’ Futterman says.”
Lydialyle Gibson; Policing the Police; ABA Journal (Chicago, Illinois); Sep 2016.

“The Glorious Fourth began with a parade to the bandstand for a spread-eagle speech and ended with a barbecue on the edge of town.”
William Culp Darrah; Powell of the Colorado; Princeton University Press; 1951.

See more usage examples of spread-eagle in Vocabulary.com’s dictionary.
A THOUGHT FOR TODAY:
Someone needs to explain to me why wanting clean drinking water makes you an activist and why proposing to destroy water with chemical warfare doesn't make a corporation a terrorist. -Winona LaDuke, activist, environmentalist, economist, and writer (b. 18 Aug 1959)