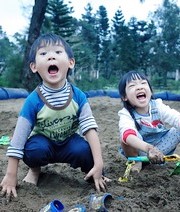 MEANING:
noun:
1. A very happy person.
2. One who deals in sand.
ETYMOLOGY:
From Old English sand + boy. Earliest documented use: 1796.
NOTES:
The term is typically used in the construction “happy as a sandboy”. Who was this sandboy and why was he so happy? If you have ever seen a child building sandcastles or digging canals on a beach, it would seem obvious.

The reality is more grim. In Dickensian England, a child was more likely to be toiling in a factory or on the streets than playing on the beach: Consider these lines from a 1804 poem “The Rider and Sand-Boy: A Tale”


A poor shoeless urchin, half-starved and sun-tanned,
Went by the inn-window crying, “Buy my fine sand!”
Originally, a sandboy was someone, not necessarily a child, who delivered sand to a pub, for example, where it could be used to soak up spilled drinks. Sandboys were paid for their labor in drinks. After a hard day’s labor, finally sitting down with a drink in hand and you can see why they’d be very happy. There’s also the term sand-happy, meaning very drunk.

Did you hear about the sandboy’s career change when he became an adult?
He now deals in sleep.
USAGE:
“And the carefree Costa Ricans, 12th in the contentment league, are not alone. Arabs and ex-pats in the United Arab Emirates (17th) are happy as sandboys. The UK rates only 18th, below Luxembourg (a made-up country), Belgium (ditto), Israel (all right if you’re not an Arab), the USA (ditto if not black), and Austria (the dull country).”
Paul Routledge; Stuff Your “Happy” Nations. GB’s Best; The Daily Mirror (London, UK); Apr 6, 2012.

See more usage examples of sandboy in Vocabulary.com’s dictionary.
A THOUGHT FOR TODAY:
You desire to know the art of living, my friend? It is contained in one phrase: make use of suffering. -Henri Frederic Amiel, philosopher and writer (27 Sep 1821-1881)